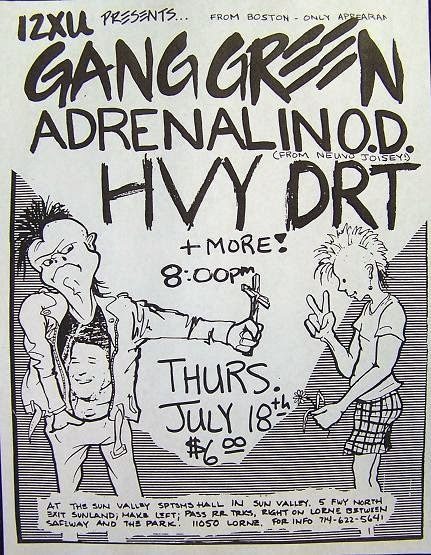 There were a number of reasons I started this blog and one of the main ones was the fact that HVY DRT hadn't appeared anywhere. To me they were a band who deserved to be much better known and appreciated.When I got there 12'', a million years ago, I was knocked out. They epitomised the SoCal sound that I'd hooked into from the rodney on the roq compilations of the early '80's.

So, it was with great suprise and excitement when I was contacted out of the blue by someone who knew the band and said they had a copy of a live tape. They'd managed to give it to someone in a studio who cleaned it up and this is the end result. I've had this for a few months, but as things are mental I've not had the time to post...poor excuse I guess.

I have no idea when this gig was, it wasn't the above date as I found that on a sharepoint site. I'll contact the very kind person who sent me this and update this post later on with facts. All the song titles are 100% correct, so apologies for not knowing the date, but I wanted to get this out there as it deserves to be heard...and appreciated :)

These guys are sooooo tight it's unreal. The songs off the ep are played with such skill they are hard to tell from the studio versions, clearly they're live, but they are tight as hell and played at the same tempo....almost note perfect across this whole show. Really impressive.

This is a real piece of history...a huge thanks to the fellow music obsessive who gave me this copy and the band for just being fucking great.