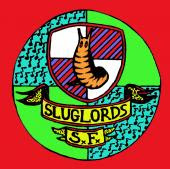 As you can see below Bruno DeSmartass left a comment on the original Sluglords post. It answers quite a few questions I had about the band........


Hello all. Bruno DeSmartass, Lord of the Slugs here. I was guitar player,singer of the Sluglords (as well as Bad Posture, Polkacide, Goofball,etc.) and bass and vox (with Flipper and Red Asphalt).
I started the Sluglords back in '83 with drummer John lieb ( who then went on to play with MDC, Morally Bankrupt on drums, Polkacide and the Extra Action Marching Band on trumpet) and Willy Lipat on bass and vox. He mostly just plays piano, and moved to Vegas.
An interesting mix of influences and great musicians. We would re-arrange songs at whim every rehearsal or gig just to amuse ourselves.
The Slugs were always my favorite of all my projects and I miss the mayhem and the music.
Just recently I released a CD; a re-issue of our EP, as well as a bunch of live tracks and some odd studio stuff. Available at cdbaby; http://www.cdbaby.com/cd/sluglords
I never lived with Ted Falconi, (shudder...:) though we are good friends. I went on tour with Flipper back in '84 and '85 when Will and/or Bruce were to sick to tour. I've played with them over the years on and off, culminating in 2006-7 where we did a lot of touring and playing at the Fillmore with the DKs and at CBGBs in NYC the last week before it closed. I'm a glorified Flipper bench-warmer.
John Lieb, our drummer, went on tour with MDC back in '84 and DH Peligro from the Dead Kennedys sat in with the Sluglords for a show at the Mab. We did some recording with him, also on the CD. John added some trumpet 26 years later! I speak to Steve DePace every week. He is in SF, Flipper taking some time off.
I flogged apower trio for a few years, Goofball. Lately I have been recording with and old band from 1980-82, Red Asphalt, we released 2 CDs of old stuff and 2 CDs of new stuff.
Enough with the recording!! I need to get back out playing!
So, as Bruno says, the cd is available HERE.

It has 22 tracks, including the remastered Trails of Slime 12'', plus unreleased and live tracks; at $9.99 to download it's unreal value for money. I can really recommened it, I've got my copy already and it adds to the original 12'' really well.

So, onto Goofball and ....to my eternal shame, I wasn't aware they existed. They are: -

After spending a morning listening to this on repeat, it's right up my street. Great stuff, wtih everything I loved about Bruno's previous bands evident here. Check them out for yourself Goofball.

You can download/buy their cd from here. I bought my copy this morning and, if you pardon my French, I fucking love it.

Thanks for the great music Bruno.

The sites below are a nice time travel through Bruno's career and all have something special to offer. I remember Red Asphalt from a million years ago, but what I don't remember is thinking "Fuck, these are good", which I did when I heard them this morning. There are a few MP3's to download two of which, Red Asphalt and Goodbye Sunshine are really good; quirky in a poppy Zappa sort of new wave way. Work that one out if you can.

A few sites that are well worth a look see: -

All pics shamelessly stolen from the MySpace sites :)