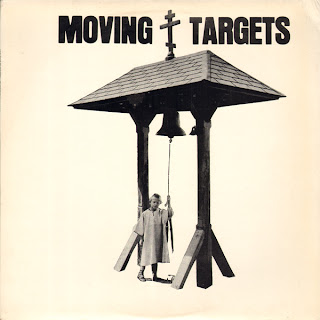 Since it's been named dropped a couple of time I thought I'd post the album.

Formed in late '81 by Ken Chambers Moving Targets really are a sleeping giant, and sadly so. I'm lost as to why they aren't better known and decades later I'm still bemused as to why they didn't reach the lofty heights of the likes of Husker Du, Replacements, Lemonheads etc; perhaps they were just a little too rough? Who knows. To my ears they are a great blend of punk, pop and melody. I'm sure the world will catch on one day.

This album is by far their finest moment and was delivered by a power trio who could match any, in my opinion. Chambers was joined by Pat Leonard (bass) and Pat Brady (drums) for this release. They were touted as a phenomenal live act, sadly I never got the chance to witness this.

This lineup imploded all too soon and Chambers joined Bullet LaVolta, but continued to write and perform with Moving Targets. They released three more albums under the moniker, but none quite matched this release, although Brave Noise is pretty darn close.. They're all worth tracking down with the final album featuring two members of Jones Very.

I really can't praise this album highly enough it's simply stellar in its beauty....if only they made music like this these days. My Nephew thinks 30 Seconds to Mars and Paramore are punk; I should point him here and educate him, unfortunately I fear his ears aren't refined enough to appreciate it. 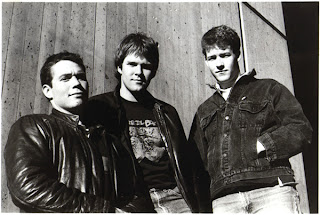 Pat Brady passed away a couple of years ago aged just 43, way too young. He as one hell of a drummer.
Posted by Neil at 7:26 am