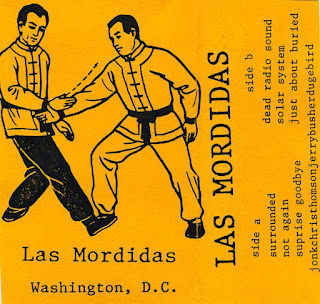 I've mentioned them in a number of posts before, so thought it was time to let this demo see the light of day. As mentioned this band was started by Chris Thompson after Circus Lupus disbanded. The band also included Dug E Bird (Rain Like the sound of Trains, Fidelity Jones, Underground Soldier, Beefeater etc etc), Jerry Busher (Fideliey Jones, Chris Bald 96 etc) & Jon Kirschten (Rain, Chris Bald 96).

Chris Thompson is another of the artists I follow religiously and I'm so glad I do as he NEVER disappoints. So.....as demo tapes go, this one is in the premier league; totally outstanding imo; I love it.

If I could be granted one wish it would be to be born in DC on the same birth date....man I'd have pogo'd so hard I'd be three feet shorter. Anyway...enjoy this Demo; two of the songs were, much, later released by Dischord as a 7''.