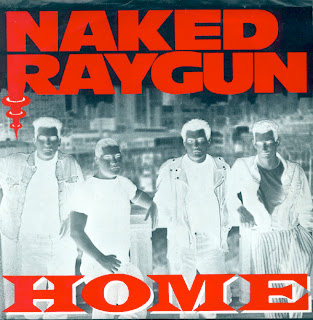 Naked Raygun came like a bolt out of the blue to a guy sitting in England in the 80's. By the time Throb Throb hit my doorstep, 1985, hardcore had become fairly formulaic with the diversity of the early days being replaced with a sieved derivative of the major players. So to have a band who didn't follow anyone else's path and managed to mix power, speed and incredibly catchy hooks was manna from heaven.

If you don't know the band grab Home and then head over here and have a read. If you are a fan but don't have the two 7'' shown below head over to iTunes and grab them, they're both staggeringly good and extend a great back catalogue. I hope they release an album soon...oh and tour the UK again.

I was lucky enough to see them in Leeds many moons ago and was told off for stage diving, sorry Jeff! They're one of those hardcore bands who just get better with age.

And I'm stumbling home
Tonight I feel alone
And the skies fire
I really feel the rain
And I just move along
Wild, not to belong
And the pain, God,
I really feel the pain
Chorus
I'm thinking on and on about it
I always dream and I don't like it
Feeling sad but I can't fight it
Home
In a fever I think I'm dead
Coloured acid webs in my head
Am I sane now?
I just don't feel the same
Dance a twisted scene
To melodies obscene
I think I'll drink now
It's my house anyhow
Posted by Neil at 8:53 am