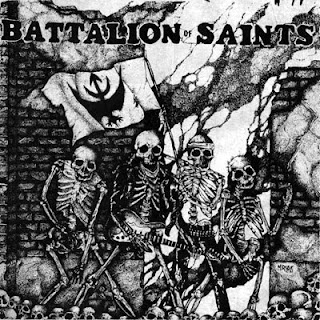 It probably seems strange now, but one of the things that excited me about record collecting all those years ago were the differences between UK and US records. The UK albums/12'' were printed cardboard that was fairly flimsy, whilst the US was sturdy enough to use as roof tiles. The US also printed the cover art on paper and then stuck the paper onto thick cardboard on many of the early releases.

I remember getting this 12'' in the post and just being blown away by the entire package, the thick cardboard, the cover design (Mad Mark Rude), and then the songs....just wow! Being a sucker for a good guitar riff I was destined to adore this band; I did, and still do.

BoS have been compared to Spinal Tap over the years, rather cruelly as both bands, one real and one fictional, suffered by the deaths of various band members. Chris Smith was one of a number linked to BoS who died way too early.

There's not one release by the Battalion of Saints that isn't, like their name, great. 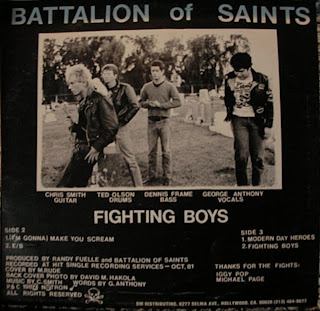