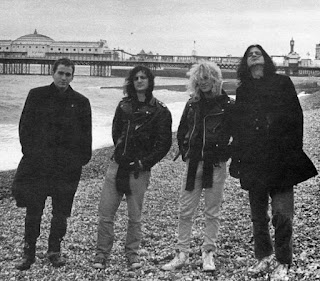 I've been chatting to Tom Lyle and he told the news that GI will be releasing a series of live shows. He sent me a couple of songs as a sneak preview of a bootleg live series that will eventually amount to 100 live shows. This live series will span the entire bands career.

They'll probably be released in one or two large sections and will be available from a variety of sources in varying kbps, possibly full res. I have around 50 live GI recordings and, quite frankly, most are pants; tinny, distorted or too much crowd noise. The clarity of these, judging by the two songs below, is excellent. I'm gonna have to bang some overtime in work to pay for all these, but I can't wait.

Both these songs are from Minneapolis MN, 3rd August 1983 and the line up at the time was: -


Sadly it looks like I'll have to wait a long time to see GI live again as the show last year doesn't appear to be leading to anything other than a one-off. Meh! I'd still love to hear GI record new stuff even if they never toured again. Great, great band.

Thanks to Tom Lyle for these files and for something huge to look forward to.
Posted by Neil at 8:32 am