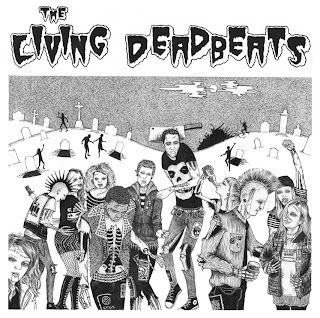 Every once in a while things happen that remind me why I do this blog, or things happen to reinvigorate me. A weekend or two ago I received a link out of the blue from The Living Deadbeats giving me the opportunity to get an advance copy of their album and their new single, with permission to share the 7''.


Track 1 from the album.
They manage to stand out from the crowd as they're more in the old style punk mode as oppossed to a million miles an hour thrash; some of which is good, but a lot just melds together. I think they could have been dropped into SoCal in 78/79 and no one would have been suprised. I've lifted the following text directly from their site as I couldn't have put it any better: -


In the spring of 2010, vocalist Lindsay Kasting, bassist Pete Fiend (lead singer of legendary 80s powerpoppers The Finks), guitarist Dirty Swagger (Dirty and the Derelicts) and drummer Nadja (Joyce Collingwood, East Vamps), teamed up with  with the intention of doing something fresh and exciting.

With eyes wide open, they built an original sound that drew on varied musical influences, yet remained faithful to late-70s LA punk. Finally, having scavenged the best parts of the Stooges and the Detroit Cobras to create a rock n' roll Frankenstein all their own, The Living Deadbeats were ready to take on the world. Or at least the West Coast.
The album is REALLY good; it's one of those that you play and immediately hit repeat. They're on tour now across Canada, so if you're in that neck of the woods I'd suggest a few bucks for a good night out watching these folks. Once again I damn myself for being born in the wrong country...oh well until the time they play the UK I'll just play this album to death....which I have been doing since I got it.

Their website can be found here -> The Living Deadbeats


Track 3 from the new album. 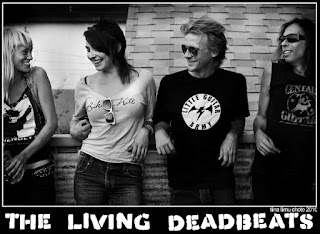