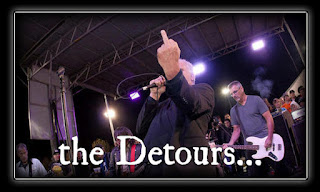 You know, hearing "Hang Ten in East Berlin" by the Detours was a total WTF moment; this is unreal!....people make music like this?...where do I sign up? Forget Discharge, forget the Exploited, forget all that...this is where I'm at.

I "borrowed" a great book from Virgin records in early '81 that listed all the Punk and New Wave records to date and from here me and a mate would compile wants lists. I read about a mythical Detours 7'' that, to this day, I still can't be sure actually exists. I've chased that so many times since...it's never materialised.

About ten years ago I managed to get a few live mp3's of the Detours and I've hunted stuff ever since. Tonight on the off chance I threw the detours and the name of a bootleg album into google and found the following live gig......free to download!!!! Does it get any better than this?

For those that don't know the Detours predated the Adolescents and DI, both of who used songs from the Detours repertoire in their live sets and on vinyl.

Go here to read some great stuff and to see who the band consists of these days....it's a who's who of SoCal.