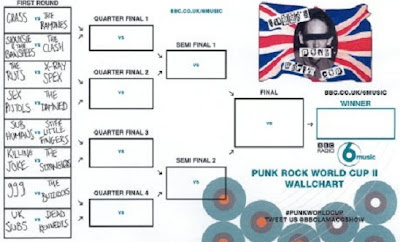 Some tough choices here for me, but here goes: -

Crass Vs The Ramones. Crass were pretty big in my early days and despite the fact that I partially blame them for the downfall of UK punk it doesn't detract from the fact that ALL their 7'' and first two albums are classics.

It's so easy to forget just how threatening Crass were back then; when had we heard the likes of Asylum? .......We hadn't! The way that track feeds into Do they owe us a living still sends shivers down my spine. I fucking love Feeding of the 5000. It's a hard album to get into, but once it clicks it sits forever rewarding you with great, great punk. However, having said all that, it simply has to be the Ramones, hands down, no argument, no explanation required. The Ramones win.

Siouxsie & the Banshees Vs the Clash. The second hardest fight in the chart but as much as I love them both, and the Banshees made some great albums, with the Scream being almost untouchable the Clash produced the Clash and London Calling which top trumps the Banshees one true bona-fide classic. So the Clash progress.

The Ruts Vs X-Ray Spex. Toughest choice for me as I adore both bands. The Ruts were simply stunning in their musicianship. Listen to any Ruts track and you'll hear four people contributing to a track as individuals, no bass player following the bass drum as often happens but contributing on it's own merits.

X-Ray Spex were one of the sound tracks of my school daze...and I love a good saxophone mixed in with punk so a really hard choice. ....BUT it has to be the Ruts, if only for Westone shine on me which would be in my top ten punk songs ever.

Sex Pistols Vs The Damned. Again I love both bands, but the Pistols late career was muddied with commerciality and sub-standard releases. McLaren ruined their reputation...and let's not mention filthy lucre eh!?

On the other hand we have The Damned who were one of the bands that kept punk alive during its lean period; mid '78 - '79. They were the band that remained closest to the ideals, no matter how ridiculous they might look nowadays, of punk and produced a higher calibre of classic albums than any punk band. Please move the Damned.

Subhumans Vs Stiff Little Fingers. This is the easiest one for me to decide and it's SLF to go forward. Nothing more to say really, just stack up the 7'' and albums and this is a total mis-match....it's Mike Tyson vs Barry McGuigan.

Killing Joke Vs The Stranglers. Sadly another David and Goliath event. Love KJ, but faced with the Stranglers, who produced five, arguably 7 classics. The Stranglers pass go and collect 200 pounds.

999 Vs The Buzzcocks. I thought this one would have been harder than it was, but on reflection it was pretty simple. Both great singles bands, but on albums, for me and possibly controversially, it's 999. They remind me so much of school and raving about their latest release.

UK Subs Vs Dead Kennedys. Again another hard one. I saw the Subs so many times and they never failed to impress. The most memorable being  in '80 at the Mayfair in Newcastle when Charlie Harper called people to get on the stage and dance along with them, there were so many people on the stage that the left side collapsed under the weight.

I saw the Dead Kennedys once and had a chat to Jello. They still remain one of the most incendiary bands I've ever seen. NOTHING comes close to a Jello on fire on stage; the guy was in a class of his own. Throw Klaus, Easy Bay and DH into the mix and we have to say goodbye to the the Subs.

Quarter Finals
Ramones Vs The Clash. Pass forward the Clash.
The Ruts Vs The Damned. The Damned win.
SLF Vs The Stranglers. JJ and Co continue.
999 Vs Dead Kennedys.The Kennedys win by technical KO.

Semi Finals
The Clash Vs The Damned. Any day of the week it's the Damned.
The Stranglers Vs The DK's. Sorry Jello, but the Stranglers win. ... just.

Final
The Stanglers Vs The Damned. No contest......it's the Damned each and every time.

All hail The Damned. 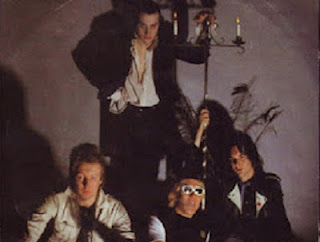