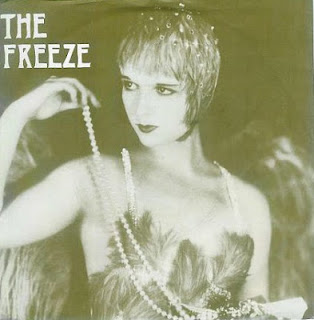 The Freeze were a late 70's/early 80's punk band who gigged extensively and supported many a band during their time, but never achieved the success that could/should have been heaped upon them based upon their two releases. They also recorded a peel session, or two, and then fractured.

Gordon Sharp (vocals) relocated to London in '82 and formed Cindytalk who have a very devout and fanatical following. Cindytalk were not punk, but were classed in that catch all genre of "post-punk".

I have to be honest and say that Cindytalk seldom set a spark alight in my world, let alone set anything on fire, but Gordon did gain many kudos points for recording with the Cocteau Twins in their early days. Anything associated with the Cocteau Twins earns respect from me. If you've never heard them I highly recommend Stars & Topsoil as a jump off point........BUT, it's about as far from punk as you can get so be warned.

Anyway...here's the Freeze's 2nd 7'', not as punk as the first, but still worthy of many a turntable spin.