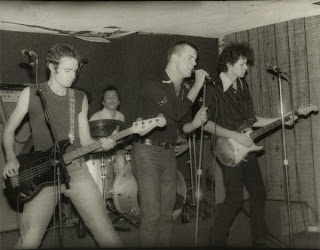 You would think it's impossible to document the punk/hardcore development of Washington DC without mentioning Black Market Baby. However, if you read American Hardcore - A Tribal History by Steven Blush, apparently it's not. This would then, obviously, also apply to the film of the same name....worth seeing all the same.


I've got to say that Blush has gone from an ill-informed buffoon to a complete moron in his lastest venture.,..I'd urge people not to buy his stuff. He doesn't deserve to make a living off the backs of others hard work.
Now if you read Dance of Days by Mark Andersen, a book of recollections made by people who were there at the time, you'll see this isn't quite right. Black Market Baby were a very important band in DC and are one of my all time favourites.This book is fantastic and if you like hardcore you should buy it, it's a great read.

This band just cannot be ignored. They're more in a punk tradition than hardcore, but have been slotted into either category by many....including me just then. :) They influenced and encouraged the younger punks who would later form the well known bands. They provided the inspiration for John Stabb to name his group Government Issue, from their World at War song.

Being that much older then many of the DC punks they didn't follow the straight edge ethos, but got pissed as farts and were rowdy as hell. Although this could probably apply to Boyd more then the rest of the band :) They were formed out of the ashes of some premium DC bands, D-Certs, Snitch, The Penetrators, Trenchmouth. The driving force behind getting the band together was Boyd, and thank god he did.

To be honest I didn't know who they were when I got my copy of Potential Suicide, but I sure as hell found out after I played it. I devoured any snippet of information about them in the fanzines I imported, but sadly nothing more appeared to be released. Then one day whilst working in a town 40 miles away I wandered into a local market and found a stall selling punk stuff. Here's an album called "senseless offerings" by Black Market Baby, I flip it round and it's the same band.  This album is an all time favourite and I played it into the ground. It's still a firm favourite and an absolute hardcore classic, in the true sense of the term.

Many, many years later I bumped into Boyd on a forum and he kindly supplied me with a couple of cd's.  One of his post BMB band, the Vile Geezers and one of his current bands demo Rustbuckit, both of which are great. I'd feel shitty if I was to load any complete album up here as Boyd and his band mates deserve the cash, so I've grouped together a few tracks to give you a taster.

If you spend some money this year buy "Coulda, Shoulda, Woulda" a compilation of their stuff...REALLY worth it ---> Here It's really cheap...BUY IT!! This is a retrospective compilation containing all thier recordings including senseless offerings.

Their website is here and it has some nice freebies and good stories on it.

This year's prophet is quite simply one of the best tracks ever recorded by any band anywhere. Music here.
Posted by Neil at 9:01 pm