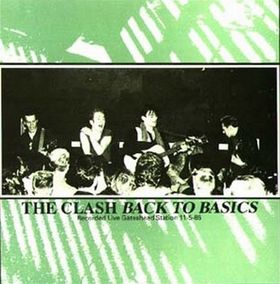 Boy this one transports me back in time. I was sitting at home on a Saturday morning and a mate rings me saying that he's been told the Clash were seen at the monument, a local landmark, and they were busking.

How ludicrous the Clash don't busk!!!

However he persisted and I headed across to town to see if it was true. I met him at volume records, local punk hangout, and via word of mouth we headed down to the exhibition park and found the Clash with loads of punks following them.

We all ducked into a subway and they played a few songs. They'd already been moved on by the police and a conversation ensued where they asked if there was anywhere they could play. A couple of guys who were involved in the running of a local music collective were there and they offered a night at the Station as a venue. Me and my mate headed off home and he instructed me to grab my camera and to meet him later on.

I did this and we met....we headed over to Gateshead and into the Station. This was an old police station that was used by the local punks to run gigs from. I had some fun times there. What a night; the Clash playing an acoustic set in the Station with 100 or so people there...a chair, and floor, being used as a drum.

The gig was recorded, on a walkman, and I took photos, one of which you can see above on this bootleg album. This picture was reproduced in Marcus Gray's book on the band called Last Gang in Town ...I didn't get paid! I still have the negatives from that night somewhere - there's some quality shots among them.

A great, great night where everyone sang along and had one hell of a time. They went on to play at the Mayfair in Sunderland which was also recorded but it was too noisy and crap. I have a few pics from there as well. I think this album was reissued as a CD, probably by the same guy :) I'd love to relive this day.