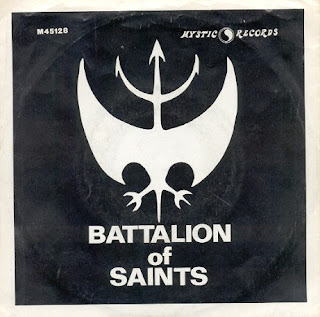 I remember getting a delivery from the postman with about 15 records in it, Fighting Boys 12'' was one of them. I put in on the record player (old school) and was knocked out. From that day, to this, they've remained another firm favourite and everything they released until they split in '85 was priceless.

This is their 7'' version of Second Coming and 28 years later I still can't decide if I prefer this or the album version, but they're both great. This version is faster and rawer while the album version is far heavier and slightly more metal. I'd loved to have seen these live with Chris Smith.

I'm assuming everyone knows about this band so I won't do the history etc; if you don't, get this, and then visit Taang to buy their cd's.

Mediafire
Posted by Neil at 6:57 am