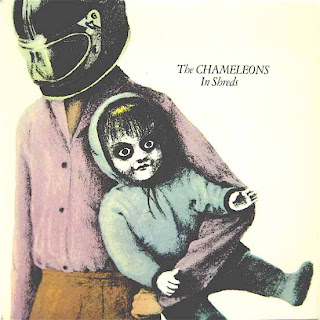 In January it was a year since my mate died and I toyed with the idea of posting a few releases that he'd got me into back when, but thought it was perhaps a little twee so decided not to. However, there is one release that he got me into in '82 that immediately transports me back in time to his bedroom waiting for him to crimp and spike his hair; the tosser took years to do anything, prior to going out to get drunk....and this is it.

I should have started by saying this ISN'T punk, it was classed as post-punk....make of that what you will. The Chameloens weren't a band I knew much about back then as this was the only release by them I owned. I've recently bought their first two albums and can really recommend them if you're a music fan. They were formed in Manchester in 1981 and lasted until the late 80's releasing a number of albums and singles. They reformed for a brief period in 2000. The most stable line-up comprised: -

The music is a melodic wall over which Mark Burges spits his dark and personal lyrics. You might not like this, but I suspect if you take the time to d/l and listen to whole thing you will. They were often placed along side the Cure and Echo & the Bunnyman at the time.

Mediafire
Posted by Neil at 6:54 pm