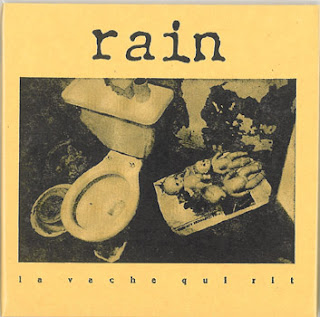 I haven't mentioned Bert Queiroz for a while so here's a release from 1990 featuring him.

This album was recorded in 1986, but didn't hit the streets until it was released in 1990. Recorded at the tail end of the revolution summer in DC which should give you a clue as to what it sounds like: - Rites of Spring, Embrace, One Last Wish etc. Don't say this too loud, as it's almost a dirty word these days, but back then this was called emocore aka emo. Don't run off to slash your wrists, this is actually a really, really good record.

Another one of those insectious bands that I love so much: -
These guys have been in some great bands and Rain were no exception. They lasted the blink of an eye before dying. This is typical of that era for DC and each song is a mix of harmony and the passion that exemplified 1986. I really can't think of another scene that popped so many short lived bands onto the scene that made such good music. I was born in the wrong town and wrong country.

Mediafire
Posted by Neil at 6:15 pm