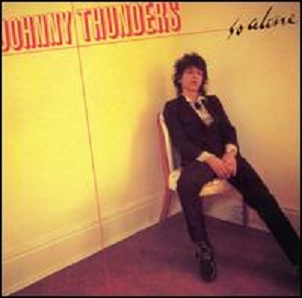 I like the early New York Dolls, but I wasn't a massive fan, they were just a decent band imo. On the other hand i was a huge fan of The Heartbreakers and Johnny Thunders; this is his first solo release and something he never managed to better, again imo. The line up who played on this record is just a who's who of artists I love: -
This was recorded after the Heartbreakers split due to pressures from recording LAMF. I'd be hard pushed to pick between the two albums; LAMF is straight ahead punk/rock album, while this is Thunders in a more relaxed mode. It's a great, great album.

I got to see Thunders quite a few times, and the Heartbreakers, and he was mostly good to great, but the last time I saw him playing has left a bad memory as he was completely wasted, missing chords, forgetting lyrics and playing for far too short a time. Sad really.

It's 20 years this month since he died/was murdered...who knows, I guess we never will.

RIP Mr Genzale and many thanks for the great music.

Mediafire
Posted by Neil at 6:07 pm