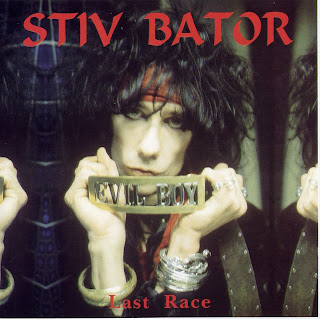 After the Lords of the New Church disbanded in the late 80's Stiv was living in Paris and he'd started to record some songs for another solo record. He recruited a number of people to assist him, including: -
Dee Dee Ramone - Bass
Johnny Thunders - Guitar
Neal X - Guitar (Sigue Sigue Sputnik - incidentally one of the worst live gigs I've ever seen was these guys)
Tony James - Bass (Gen-X, SS Sputnik)
Kris Dollimore - Guitar (Godfathers)
Stephen Richie - Drums
So the story goes, on day one Dee Dee had an argument with Johnny and after a few teddies were thrown they both stormed off back to the states. Stiv continued with replacements and this cd was the result.  It's not the finished article as not long into recording he was hit by a car, got up, dusted himself off and went home, dying later that night from internal injuries. Such a shame.
There are rumours that demos exist of the first day, but I'm not holding out. This is as close as we'll get I suppose. Stiv Bators was great, there's not a single release of his that I dislike.
Music 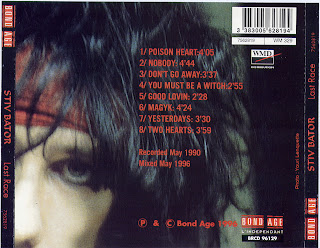