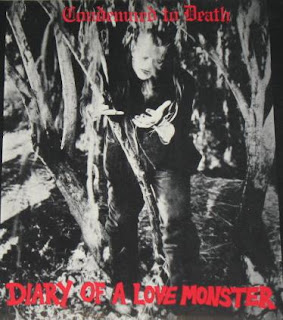 C2D came out of the Vats, mentioned earlier in the post about the Sluglords. The Vats was an abandoned brewery where people squated and bands rehearsed/formed, along with the Sluglords/C2D it was also home to MDC and DRI....imagine getting to hear those bands each week for free!!

Condemned to Death formed in San Francisco in early '83 Keith Chatham (bass) completed the lineup of a bassless band rehearsing in the Vats. The other members were Eddie Morgan (vocals), Tim Nelson (guitar), Mike Chubka (drums). They released a demo, one 7'' and this excellent, uncompromising slab of hardcore.

Just as they were recording this album singer Eddie decided to leave the band and the album was completed with the addition of Scott Wilkins, as well as some songs being sung by the remaining members. This lineup wasn't destined to last a long time as Keith moved to Australia and joined Death Sentence/Vicious Circle, Mike and Scott joined fellow Vats band Verbal Abuse and Tim to the Serial Killers. All these bands releases are worth tracking down.