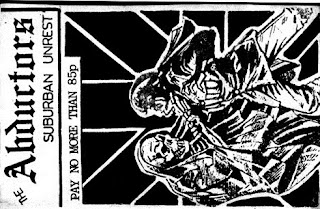 Here's a classic for you.  This is a mates band from a million years ago, well 82 or 83, I can't remember exactly, released on a local tape label. The Abductors were from Newcastle-Upon-Tyne and were all friends of mine, Carl and Hindey especially. They were typical brit punk from that era, war lyrics etc, but they showed real promise early on. Sadly Carl decided he wanted to go in a different direction and after he left the band split up.
I've not played this for years and still think that the production never captured them in the right light.  They were so much better live and I have a different mix somewhere which beats this final released version. We all had fun bouncing around the place to them when they played live. Sadly I've not seen these guys for 20 plus years.
Mediafire
Posted by Neil at 5:23 pm