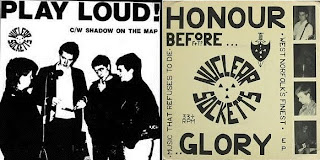 Formed in that hotbed of 70's UK punk, Kings Lynn.  They were much loved by John Peel, who gave them lots of airtime. Releasing two excellent singles in 1981, both of which I snapped up after hearing them. Their first Honour before Glory sold so well the band started their own record label, Subversive records. The second, Play Loud, is still a huge favourite of mine and really shows the diversity of punk at the time and how good the band could have been had they not split up.
A flexi disc was released by Trees & Flowers fanzine in 81/82 which I'll upload one day when I dig it out the loft.
A quick search before posting showed that there's been some recent(ish) activity with them.  Overground records, ran by that lovable Minehead reject John, have gathered together the two 7'' plus a John Peel roadshow recording. This can be found here: - http://www.overgroundrecords.co.uk/
Their Myspace is here: - http://www.myspace.com/nuclearsocketts
Link removed due to someone reporting me.
Posted by Neil at 7:06 am