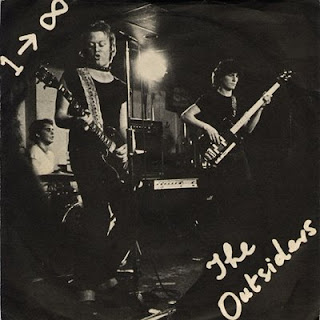 Such an underrated band.  Tony Parsons once slagged this band off calling them a bunch of hippies, but that just shows what a fool he really is. When I was young I used to dig around record fairs trying to find bands I'd missed, or ignored, in the 70's and this is one I found very early on.This was before the interweb so you had to wade through mounds of crap to find the odd diamond and this one shone brighter than most.

I think it was the cover that attracted me if I remember correctly. I found their two albums shortly after, this was '80 I think. Andrew Borland was one of those quintessential British artists who produced a wealth of material to enjoy. The Outsiders morphed into The Sound in the late 70's and Adrian went on to a flourishing solo career. Sadly he was plagued with mental illness and he took his own life in 1999.

To this day I can't understand how this band can be so over looked when crap like The Killjoys, my opinion, seem to gather speed with more and more saying how good they were. They weren't.....The Outsiders on the other hand were good.