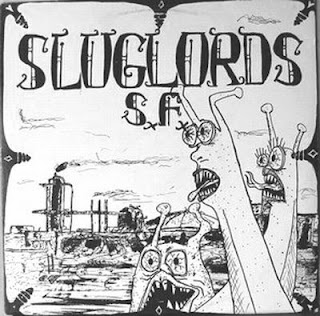 Another one of those "hidden gems" from the hardcore days.

The Sluglords were formed by guitarist Bruno DeSmartass, ex Bad Posture and after sluglords split up some members went on to form Morally Bankrupt. I can't tell you a whole lot about this album as my copy has been in storage for years and there is precious little information on the web about the personnel. Some of the songs featured on this album were also played by Bad Posture in their day.

What I can tell you is that this is a CLASSIC.  It combines great musicianship with a very good mixture of melody, speed and driving tunes. They originated in San Francisco and played many shows, but seem to have fallen well under the radar for some inexplicable reason. Life without Justice has an immediately catchy chorus.  I'd put this is the same bracket as HVY DRT and would urge you to download this if you don't have it. It's a taster, for more info look at the later entry.