TSOL swept across my circle of friends like wildfire in the early 80's. From the very first imported release it was obvious this band weren't a run-of-the-mill hardcore band, they had something extra.

For the first few years of their existence they took you on pretty much every ride possible, eventually running of out speed in a sad display that left a bitter taste in my mouth. True to TSOL standards they managed to erase that.....

Formed in the late 70's from the ashes of Vicious Circle their first release was a 12'', on Posh Boy records, which was the first release I got to hear via a taped copy; I was instantly a fan.

Released in 1981 this record was politically charged and stands up as well today as the day it was released. 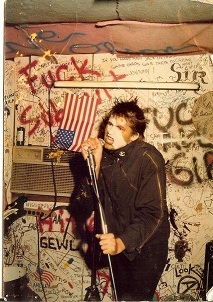 This would be the consistent line-up for the first few years, and without a shadow of doubt, the best/classic line-up.

The band were all big lads and wouldn't take any shit from the audience, which they often got as they weren't afraid of challenging the stereotype, Jack would often wear makeup on stage. 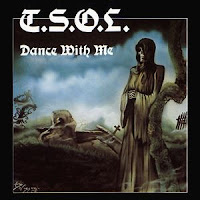 They were also a band who didn't sit still and with their next release they kicked out a gothic classic, still with the drive of the first 12'', but introducing a much darker sound.

Dance with me was released in 1981, on Frontier records, and could lurch from fast hardcore to the astounding beauty of a song like Silent Scream. If there was any doubt this album made it abundantly clear that TSOL had real talent.

Their next release was the Weathered Statues ep released on Alternative Tentacles and was a good continuation from Dance with Me.

Their second long player is my favourite, and was at the time of release, but was the one that was slammed by fans. To parallel the UK's Punk scene a few years earlier, US bands tried to push the envelope and were dismissed by fans for doing so; The Damned and Adverts second albums were slated as were Bad Religions, Code of Honors and TSOLs.

Released in 1982 on Alternative Tentacles they added keyboards to their sound with Greg Keuhn providing the fingers.

This album is a huge departure from this previous releases and received, at best, lukewarm reviews; you can find some here.

They appeared in the wonderful Suburbia film around this time.


The band had a torrid time on the road with this album resulting in the sad departure of both Jack Grisham and Todd Barnes.

Ron and Mike recruited Joe Wood and Mitch Dean as replacements and they released the good "Change Today" album in 1984. The album was more rock and even though Ron was still there it didn't really sound like a TSOL album to me. They then released "Revenge" in 1986, I bought this, but must have played it 10 times since that day.

This is where things started to go very, very wrong for me as they released the terrible "Hit & Run" album, by which time Ron had quit the band. An equally horrible release of "Strange Love" followed in 1990 by which time they'd become a poor second rate hair metal band. Joe Wood did a good job on Change Today, but, to me, he dragged a great bands name through the dirt with sub standard formulaic blues/rock albums and I wouldn't give either of these releases shelf space.

In the 90's the original members of the band started to play some live dates, but the rights to the TSOL name were now owned by Joe Wood and Mitch Dean who prevented the originals from playing under that moniker, so they played as LOST......TSOL backwards. This didn't last long enough to produce anything in the studio, but did result in a live album. Drugs had always played a part of the band and this is why this reunion ended.

This could have been the epitaph for TSOL and it would have been a very unfitting and messy end for a very important band. Happily this isn't the case as in the late 90's the original members fought a legal case for the rights to the bands name and won. Unfortunatly around this time Todd Barnes passed away from a brain aneurysm and was replaced by Jay O'Brien. 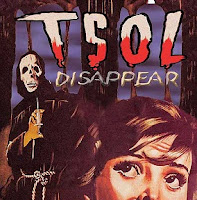 The reunited original members then released a great 7','Anticop, followed closely by their first studio long player in nearly 20 years. Disappear was released in 2001 on Nitro records and was a great return to form and is a perfect fit with the first four releases.


In 2003 they released "Divided we Fall", again on Nitro and this has become my 2nd favourite TSOL album. The album is a tour de force that has all the elements of TSOL that I love so much, the swirling, atmospheric guitars of Ron, the melody, the pianos/keyboards, the drive, fiery lyrics, a great back beat of bass and drums, finished off with Jacks great voice. You could pick a number of songs from this album and drop them into the early releases and you wouldn't be able to spot them. 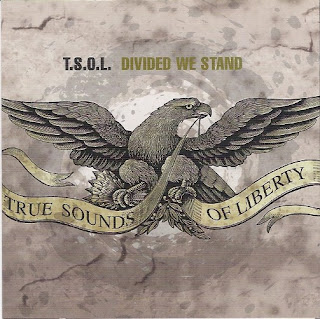 In 2006 it appeared the reformation was over as TSOL played some farewell shows, but in 2007 they played some more shows together and in 2009 they released another new album. "Life, Liberty and the pursuit of free Downloads" was available to download for a period of time in 2009. The title of this opens up a huge can of worms for me and something I'm struggling with atm...time will tell if it develops.

This is a very good album, if a little softer than DWF, but a fine addition to the TSOL legacy.


I'd be hard pushed to choose a favourite American HC singer, but Jack would be top five, if you throw in the charisma and wit then he'd be number one. I love some of his banter in this vid. It's not the best sound quality, but wtf it's TSOL. You can download a copy this video to your harddrive if you follow the "share" link.

Mediafire
Posted by Neil at 7:01 pm