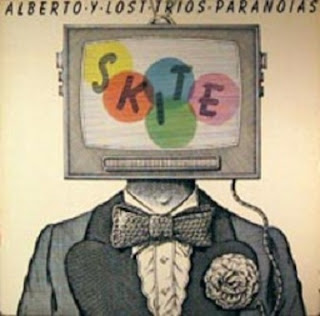 Most people will know the berts from the Snuff Rock or Heads Down, No-Nonsense, Mindless Boogie 7'', but they also released three good albums, Skite is my favourite.

Formed in 1973 by CP Lee, Bob Harding and Jimmy Hibbert, with the sole intention of taking the piss out of other bands, a feat which they easily achieved. However, whilst taking the piss they also created some really interesting and catchy music, hence the success of Heads Down, a Status Quo piss take.

Between 1976 and 1982 the released three albums and a number of 7'', all worth grabbing if you like this sort of thing. I appreciate the comedy factor in their music, but I appreciate the music more. There's a couple of duff tracks on this album, but ones like Mother Superior, Juan Lopes, 23 easily make up for them and there's also the great doo wop version of Anarchy in the UK.

Sadly they called it a day in '82, two years after singer Les Prior died. His snotty "punk" vocals were great, as Snuff Rock testifies. A word of caution though, if all you know is Snuff Rock this might come as a shock, it's not punk in any way.

CP Lee released a book a couple of years back that's really worth reading. Find it here.
Posted by Neil at 6:39 pm