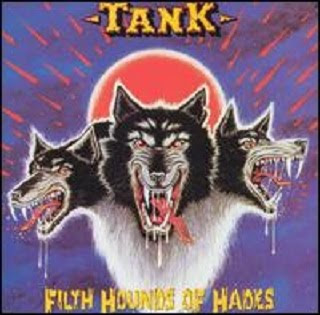 This is Tanks first album and the one that most people agree is their finest hour.  Whilst I dearly love this album, I think their 3rd or 4th albums are better, but this one is definitely the punkiest. Filth Hounds has short, sharp and aggressive songs, short and sharp like punk,but with the technical wizardry of metal layered on top. A true mix of punk and metal.

I saw Tank supporting Motorhead three nights in a row in '82 as their then tour manager had been involved in The Damneds '81 tour. I worked for The Damned in '81.  He invited me to three nights at Newcastle city hall and on the third night I got royally drunk with Algy and Lemmy. I drank approximately 10% of their consumption and was three times as pissed...fun times though. 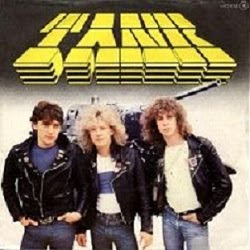 At this stage Tank were a three piece: -

I'd recommend this download as the entry to Tank if you've not heard them before.  They are hugely overlooked in the NWOBHM field, but pissed on ALL of their contemporaries. Tank, with Algy Ward, were an amazing band.

They're still going now, but Algy is no longer with them and it really shows.