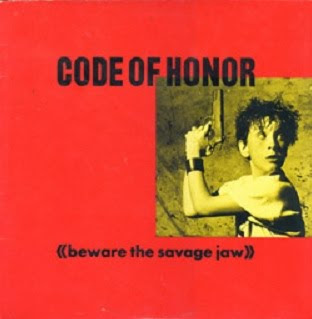 If I could only listen to 5 albums for the rest of my life, this would be one of them.

Formed at the tail end of 81 when Sick Pleasure lost their singer, happily for the world, Johnathan Christ was able to step in as his previous band, Society Dog, had come to an end. The band released one 7'' "What are we Gonna Do" a split album with Sick Pleasure and this album.

Their first two releases show that hardcore didn't have to follow a standard path and could have it's horizons pushed. Both are excellent releases and are "must haves". However, Beware the Saveage Jaw is where they blew me away.

I was trading records with Americans in the 80's and received this one in a tatty form from a guy who, thought, he'd ripped me off.  He sent me a lot of stuff I hadn't asked for and took some very good stuff in return. I was pissed off at first, but would now thank him as he sent me this record in '84 and I've loved it ever since. This album is one of the pariahs of the punk world and is still dismissed by people who don't sit down and listen to it. This ISN'T an instant album, it takes a few listens, but if/when it clicks it's very rewarding.

All the band could really play their instruments and this release is where they got to show that in fine detail. There isn't a bad track on it and each one flows with intricate bass, guitar and drums, all tied together with Johnathins excellent lyrics and snotty voice. If you haven't heard it, I can't give a fair description of what it sounds like, but it's punk based, pushed beyond it's limits.

I've said previously that there's bands that leave you feeling robbed, Code of Honor are number one on my list. I can only dream of the music that they could have gone on to produce had they survived.

I could drone on about this album for years, but rather than do that can I suggest that you go buy their recently released discography CD from the mighty Subterranean records here Support the label and the band, they both deserve it and the CD's very nice.