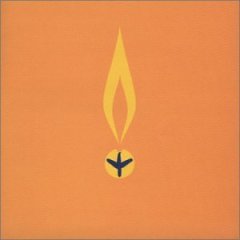 Speaking of J Robbins; during the last days of Jawbox he and Bill Barbot had been jamming with Pete Moffett and even toyed with the idea of bringing him into the band, but events moved on and Jawbox split up.

The next logical step was to continue what had been a jamming session into a band and 'hey presto' we have Burning Airlines. They promptly released a 7'', followed closely by this album. Soon after Bill Barbot left the band due to real life commitments and was replaced by Mike Harbin.

Things were looking ok and the band was touring extensively when in 2001 September 11th occurred and venues refused to book, or promote the band, due to the name. They'd actually taken the name from a Brian Eno song, but none the less this appeared to be a killing blow and they split in 2002.

They also released a second album in 2001 called Identikit and a couple of split singles, all of which are worth tracking down.