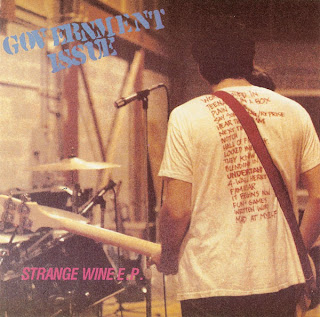 Ahhhh Government Issue......I love this band and the more time that passes the better they seem to get; they never date.

Formed in 1980 and taking their name from a line in a Black Market Baby song they released their first 7'' in 1981 on Dischord; a record that took me years to get into. They had a huge revolving door of personnel for a number of years until they hit their best line up, in my opinion, of: -

They released 6 albums, a number of 7'' and a few live albums.......this being classed as one of them although that's not strictly true as three of the tracks were recorded in the studio. I remember when they stayed ay my house and Tom Lyle asked me which was my favourite GI album, I answered Fun Just Never Ends, Stabb said this was his fave as well. Tom seemed perplexed as to why this was my favourite, but at the time it was the riffs; he's a great guitar player.

Today I couldn't pick a favourite, I love all their releases and they travel with me everywhere in some way, shape or form. Sadly they split up in 1989. I'd love to see them reform and start recording again; a hardcore band who evolved into something truly special.