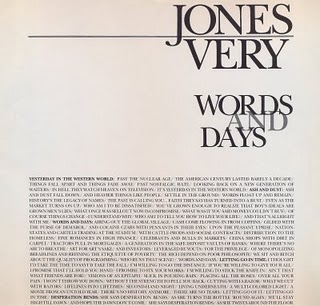 After the breakup of Articles of Faith Vic Bondi released a solo album and worked on Microsofts encarta project as well as teaching. He then formed Jones Very, named after the Salem poet, with Jeffrey Goddard and Jamie Van Bramer. They lasted a few years and threw out a handful of recordings, this being the first.

If you know Vic Bondi you'll know what to expect. Vic deserves so much more credit than the scant praise he receives, the man is a great stalwart of punk/hardcore.

Mediafire
Posted by Neil at 9:45 am