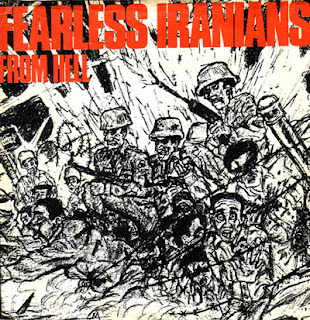 It might seem daft now, but these guys scared people back then; people dressed in masks advocating violence, middle class America was freaked. Iran back then was the Al-Qaeda of it's day.

Formed from remnants of Marching Plague, an ex Butthole Surfer with a crazed Iranian singer. They lasted until the early 90's and released some good records. although they drifted in a more metal direction. This, their first 7'', wasn't metal....it's a raging slab of hardcore with "blow up the embassy" and "iranian klan" being stand out tracks. I didn't really know what to make of these back in the 80's, were they a piss take? As soon as you hear it you forget all that and enjoy the music.

Mediafire
Posted by Neil at 7:32 am